Today You Will Get Your Soulmate 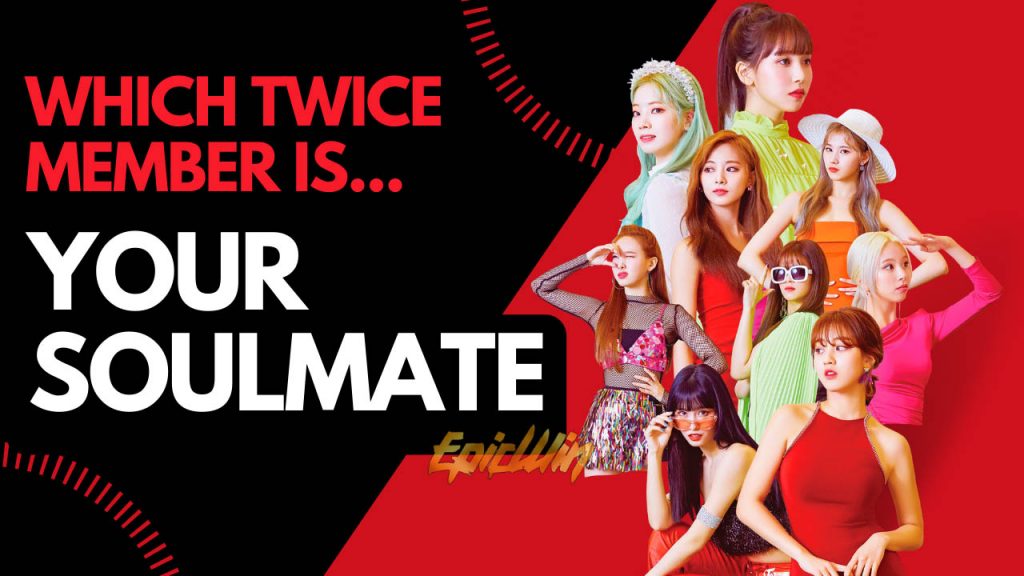 When it comes to creating amazing twice member quizzes, you’ve come to the best place online. We have so many quizzes for you it’s insane. But today the main aim is for you to find yourself a soulmate from Twice. Today must be your lucky day, because you are going to find that soulmate.

Playing our soulmate quiz is easier than you think. You will have twenty questions to get through. You will be shown the questions that you got correct and wrong at the end of the quiz. You will also be able to retry the quiz at the end, as we all know you want to get a clean 20 out of 20. Dont forget, we have many other Twice quizzes.

When it comes to finding a soulmate, its a task that has to be done properly. We have did some extensive research into what we need to ask you in order to get the most correct answers from you. To find a soulmate we need to know alot about you. We will be asking you question about things you like, things you love and things you hate. Once we have all of the information we need. We run it through our algorithm to give you the most accurate results. Are you ready to find a soulmate in one of our twice quizzes?

As you already know Twice has quite a few members in it. Getting to know the member’s kpop profiles is important. Today we are going to pick out one singer who we think you need to learn more about. Today we will be talking about Dahyun.

Dahyun was born on May 28th, 1998 in Seongnam, Gyeonggi. She has an elder brother and was raised by her parents. She began singing in her church choir when she was just a few years old. When Dahyun was in sixth grade, a video of his church’s “eagle dance” was uploaded to YouTube and quickly went viral. JYP Entertainment spotted Dahyun’s performance at a dance event and hired her as a trainee, where she trained for nearly three years. A few people at epicwin would love to take her on a date lol

Dahyun was a contestant on the reality programme Sixteen in 2015, which aimed to find the next group of JYP Entertainment’s female group. Dahyun, one of the nine winners, was chosen to join the group as a vocalist and rapper. “Like Ooh-Ahh” was the main song from Twice’s EP, The Story Begins, which was released in October of that year. We are getting you ready to try out our twice quiz.

Yoo Kyung-wan, better known as Jeongyeon, was born in Suwon, Gyeonggi, South Korea, on November in 1996. Gong Seung-yeon, a famous actress, is one of her two elder sisters. During his time as South Korea’s president, Kim Dae-jung, her father worked as a cook for him. At an early age, Jeongyeon began taking aerobics lessons, which sparked her love in singing and dance.

Sana originally intended to pursue a singing career in Japan rather than South Korea. After an employee of JYP spotted her, she was invited to the annual JYP Japan audition that same day. In 2012, Sana was accepted into the JYPE trainee programme in Korea after passing the auditions. Before her debut with Twice, she had been training for nearly three years.

Tzuyu arrived on earth on June 14th, 1999, in based Taiwan, to self-made business owners. She began dancing at an early age and attended a dance academy to further her education.

She reminds us a bit of a singer from blackpink. Nothing like our special twice ladies though.

After a talent scout at the MUSE Performing Arts, Taiwan, found Tzuyu, she traveled to South Korea in November of that year to continue her education in the arts. She earned her middle school diploma in 2016 after passing a test at Tainan Municipal High School. In February 2019, she and bandmate Chaeyoung graduated from an Art School in Korea. Tzuyu was a contestant on JYP Entertainment and Mnet’s reality programme Sixteen, which aired in Korea in 2015. Twice was founded after she was one of nine successful participants in the auditions. Tzuyu, on the other hand, was chosen by the crowd, unlike the other Sixteen winners. Ready to get stuck into our Twice Trivia? Its Soulmate time!