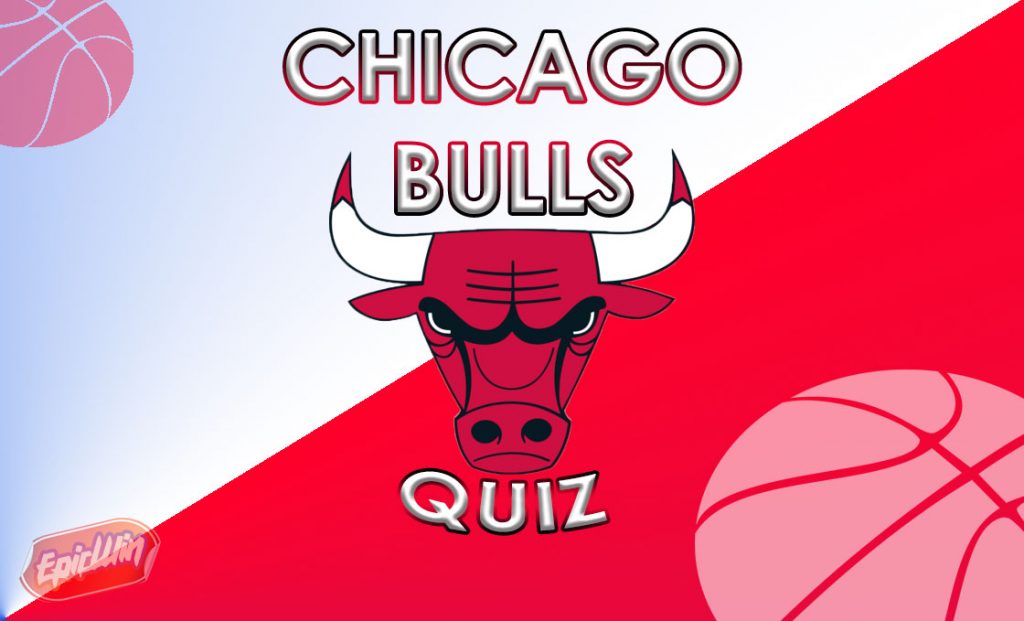 Skip the Reading and begin the Bulls Quiz below!

So you're a Chicago Bulls Fan?

Welcome to our Chicago Bulls quiz. We know you landed here because you obviously class yourself as a Bulls fan. But how much do you really know about them? OFFTOPIC – Whos Lebron? Yeah we know you’ve got air jordans, we know Michael Jordan is in your top 3. But how much do you know about the history of the Bulls? Well, we will aim to teach you a few things you didn’t know in our Bulls quiz. Class this as your master class in the Chicago Bulls. This quiz is aimed at True fans, people who think they are fans, and people who just love basketball.

If you want to succeed in our Chicago bulls quiz game. You will have to have your wits about you. If you have been a Bulls fan since you were in nappies, you will go through this quiz like a knife through butter. The quiz has twenty questions for you to answer. If you get a question wrong you will have to reconsider if you are a true Bulls fan.

But we advise you to carry on playing the quiz. If you manage to complete the quiz you will be shown your certificate of achievement and will be classed as a TRUE CHICAGO BULLS FAN.  You will have four answers to choose from in all questions. If you wanted a quick history lesson on the Bulls before playing the quiz keep reading. Another one of our great NBA team quizzes.

Getting you ready for the Chicago Bulls Quiz

The Chicago Bulls are one of the most well-known basketball teams in the world. They come from the USA and are based in the windy city of Chicago. The Chicago Bulls are a participant of the Eastern Conference Central Division of the (NBA).   The organization was established in January 1966 and competed in its first NBA season in 1966–67. They play their home games at the United Center, where they share it with the Chicago Blackhawks (NHL). Dont forget our last name trivia game.

Offtopic- Check out our Kyrie quiz … and continue, The Bulls achieved their biggest popularity in the 1990s, while they contributed significantly to the NBA’s global popularisation. They are renowned for being one of the NBA’s biggest dynasties, having won six NBA titles between 1991 and 1998, including two three-peats. Michael Jordan, the quick Scottie Pippen, and boss Phil Jackson coached all six of their winning teams. The Bulls are the only NBA team to have won several titles without missing an NBA Finals game. If you wanna check out our other basketball quiz, check out our NBA Logo quizzes, or our MVP quiz which is one of the most popular ones. 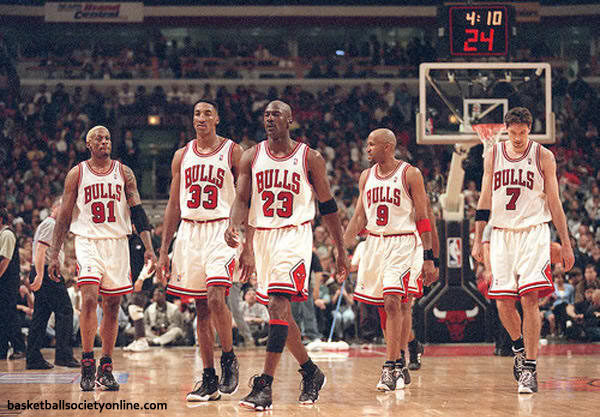 In the 1995–96 season, the Bulls won 72 games, establishing an NBA milestone that lasted till the GS Warriors achieved 73 games in 2015–16. The Chicago Bulls were the first NBA team that won 70 games or over in a full season, and they remained the one and only NBA organization to do so until the Warriors came and stole their glory.

The Chicago Bulls were unable to recapture their previous performance since 1998. All across the 2000s, the team suffered but showed some promise mostly in the mid-2010s. They were led by Derrick Rose and Joakim Noah at that point. This resulted in a 62-win season in 2010–11. Nevertheless, as a result of injuries and player exits, the club wasn’t ever positioned to exploit the momentum and has since fallen deep into averageness. Know much about NBA stadiums at all? 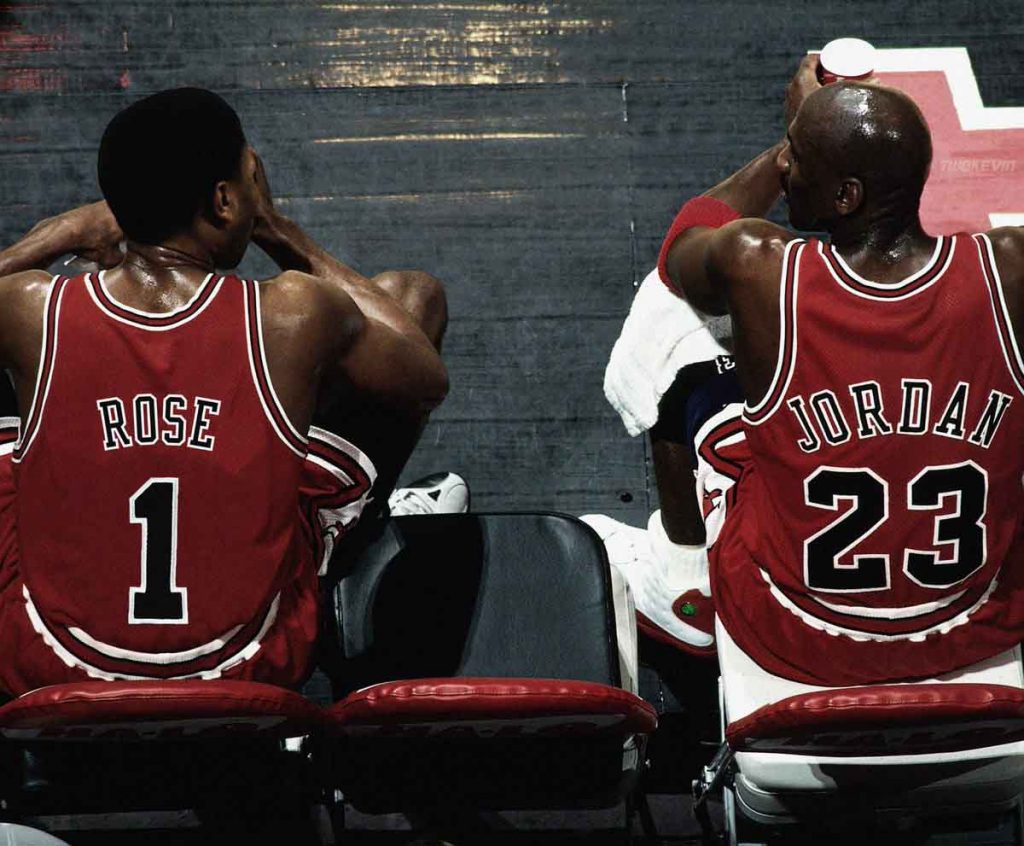 Michael Jordan and Derrick Rose also received the NBA’s League Mvp Award during their time with the Chicago Bulls, giving the Bulls a total of 6 MVP trophies. The Chicago bulls’ main opponents include the Cavaliers, Pistons, and the New York Knicks. Let’s continue getting you ready for our Chicago Bulls quiz.

The Bulls picked Coby White as well as the seventh pick of the draft and Daniel Gafford in 2019. The squad added legends Tomas Satoransky and Thaddeus Young mostly during the off-peak of the season. The league postponed the season in March 2020 after Rudy Gobert, unfortunately, tested positive for COVID-19. The senior management also dismissed long-serving general manager Gar Forman in 2020. Know much about NBA team logos? 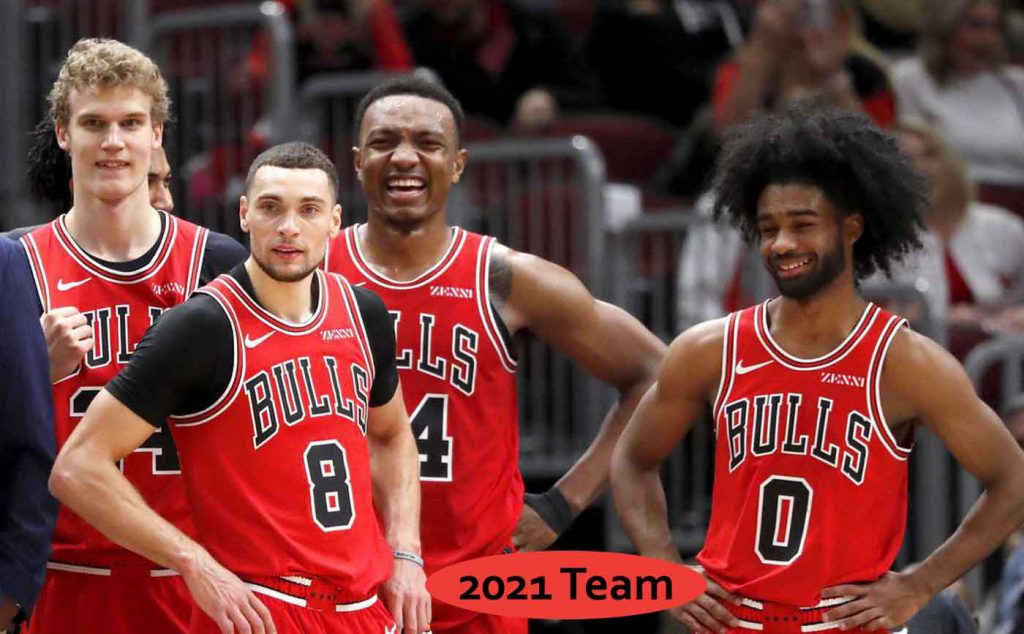 They then promoted John Paxson to a top adviser and appointed Artras Karniovas as executive VP of operations. They also appointed Marc Eversley as the new general manager in May 2020.

In June 2020, the Bulls’ campaign came to a close when the NBA Board of Governors approved a decision to reintroduce 22 teams to compete in the so-called “NBA Bubble”. The Chicago Bulls, unfortunately, ended 22–43. This subsequently led to  Jim Boylen being fired as head coach in August 2020. You must almost be ready for our Chicago Bulls Quiz?

Did you know the Bulls have always had an ongoing tendency to wear black sneakers during the tournaments (irrespective of whether they are at work or at home lol jke), this goes way back to 1989 when the traditions were introduced. Then-Bulls replacement center Brad Sellers proposed wearing black shoes to demonstrate team solidarity.

They were the first squad to start wearing black socks with black shoes in the 1996 championship.  Since then, several franchises have adopted this look. It was noticed that when the Bulls returned to the playoffs for the first time in six years in the 2004–05 campaign, they maintained the practice of wearing black shoes.

Well, we hope you have enjoyed our super quick masterclass on the Chicago Bulls. You will for sure be a part of the people who know a lot about the Bulls now. That is a badge to be proud of wherever you go. Our Chicago bulls quiz is now ready for you to kill it. Think you can do it? Don’t forget our other NBA team quizzes. Also our Logo quizzes.  We think you can, so just click play now below.